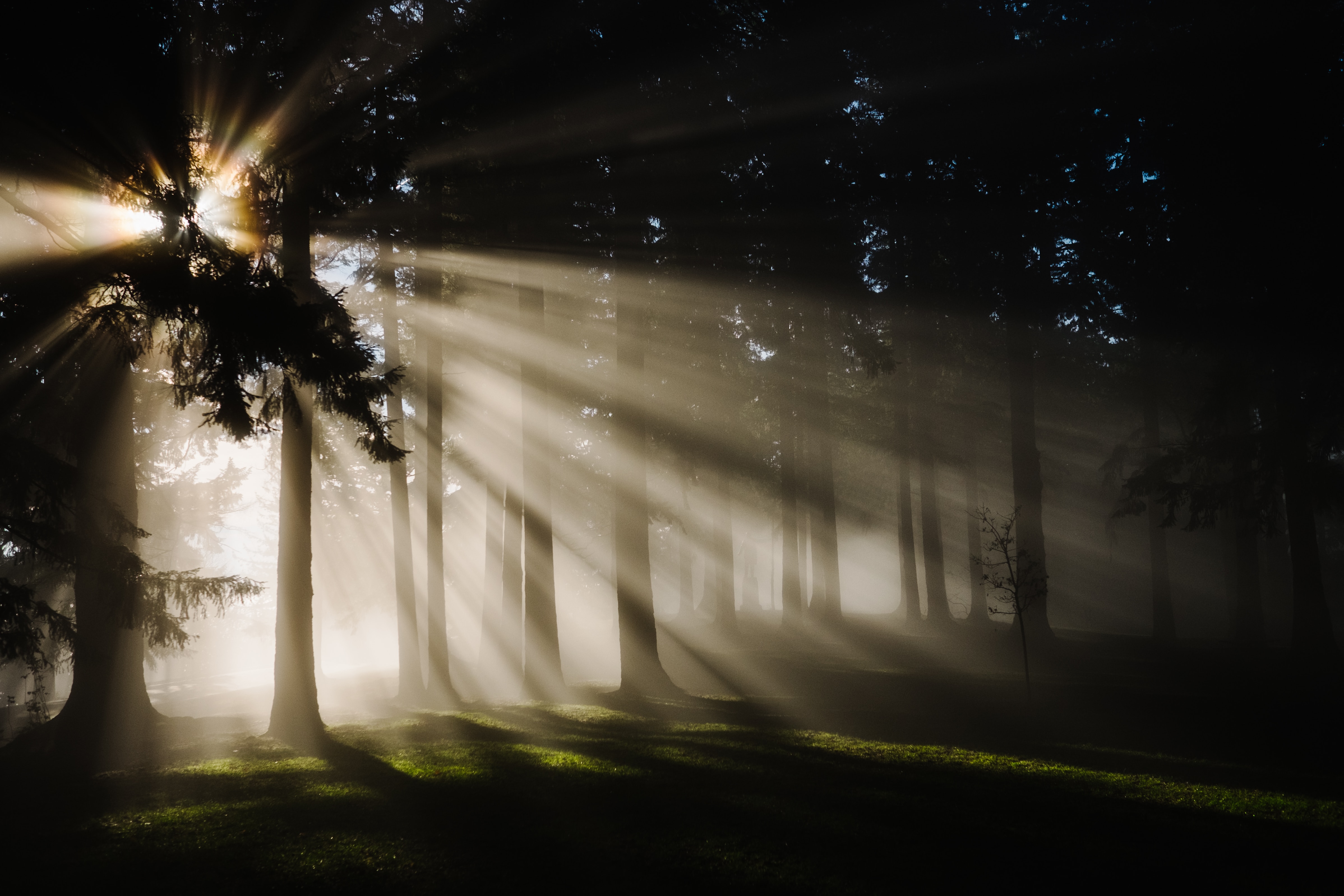 I love this photo because in the midst of the dark forest, bursts a radiant light. A light that overcomes the darkness!

Now, does that not sound familiar? Does that in any way remind you of some words Jesus said right before His arrest?

Jesus said in John 16:33, “I have said these things to you, that in Me you may have peace. In the world you will have tribulation. But take heart; I have overcome the world.”

When Jesus said these words to His disciples, it was the night before His death. He saw that they were filled with fear and sorrow and all He wanted to do was … wash their feet and assure them of His love for them and the promises He made to them.

If you want to read the series of promises that He made to them, read Chapter 14.  He wasn’t as concerned about the horrific suffering He was soon going to face, as He was MOST concerned about His frightened followers.

So, in Chapter 13 of John, He assures them of how His love for them would continue, followed by Chapter 14 … a chapter of His promises letting them know they would not lack anything they needed after He left them.

And then in Chapter 15, He tells them that they would face persecution in His name.

Is that not the sweetest name?

Jesus was telling them that it was His name that would usher in persecution.

But here’s the question….as they faced persecution, and as we are facing persecution, what did Jesus say we are to know…to do…to believe?

Before we answer that, we really need to look first to Luke’s account (21:8-24), to see in more detail what Jesus said to them regarding the coming persecution of being one of His followers:

8 And he said, “See that you are not led astray. For many will come in my name, saying, ‘I am he!’ and, ‘The time is at hand!’ Do not go after them. 9 And when you hear of wars and tumults, do not be terrified, for these things must first take place, but the end will not be at once.”

Jesus Foretells Wars and Persecution
10 Then he said to them, “Nation will rise against nation, and kingdom against kingdom. 11 There will be great earthquakes, and in various places famines and pestilences. And there will be terrors and great signs from heaven. 12 But before all this they will lay their hands on you and persecute you, delivering you up to the synagogues and prisons, and you will be brought before kings and governors for my name’s sake. 13 This will be your opportunity to bear witness. 14 Settle it therefore in your minds not to meditate beforehand how to answer, 15 for I will give you a mouth and wisdom, which none of your adversaries will be able to withstand or contradict. 16 You will even be betrayed by parents and brothers and relatives and friends, and some of you they will put to death. 17 You will be hated by all for my name’s sake. 18 But not a hair of your head will perish. 19 By your endurance you will gain your lives.

Jesus Foretells Destruction of Jerusalem
20 “But when you see Jerusalem surrounded by armies, then know that its desolation has come near. 21 Then let those who are in Judea flee to the mountains, and let those who are inside the city depart, and let not those who are out in the country enter it, 22 for these are days of vengeance, to fulfill all that is written. 23 Alas for women who are pregnant and for those who are nursing infants in those days! For there will be great distress upon the earth and wrath against this people. 24 They will fall by the edge of the sword and be led captive among all nations, and Jerusalem will be trampled underfoot by the Gentiles, until the times of the Gentiles are fulfilled.

What did Jesus say we are to know…to do…to believe? That as we bear the name of Jesus, the persecutions that come will be opportunities for us to bear witness “of” that precious name. But among all His words of what was to come, what else did Jesus say in today’s verse for you and for me – and it’s what He said to His first 12 disciples –

That we will experience in the midst of it all,  PEACE.  Divine peace. Supernatural peace. A peace we can’t conjure up on our own, but an overcoming peace. A ‘piercing the darkness’ kind of peace!

After Christ’s ascension and after the coming of the Holy Spirit at Pentecost, the disciples were totally transformed from men of fear to men who demonstrated what they walked in – extreme bravery! From men of timidity to men of authoritative power! Peter and John were uneducated and untrained men among the Jewish leaders and yet, as they opened their mouths, the overwhelming verbiage of the Holy Spirit poured forth, to the point that Acts 4:13 says the religious scholars who heard them “were amazed!”

As followers and disciples of Jesus Christ, we will face persecution of all kinds, in all degrees of suffering, but we can be strengthened in our own walks of faith by reflecting on our brothers who demonstrated supernatural courage and boldness –

FILLED with the Holy Spirit and marked by personal conviction, they were not in any way intimidated or shrunk back by the threats of the world. Instead, they remembered!! They remembered every single day John 16:33.

Where did their certainty come from? Where did their confidence find it’s root? They BELIEVED John 16:33 – when Jesus said, “Take heart…I have OVERCOME the world!”  They moved about their lives in certainty of 1 John 4:4:

The intimacy they had with Him created a simplicity in their walk  –  the simply took the Lord as His Word!

Today, let’s hold up our heads. Get in God’s Word. Let every word, verse, and song STRENGTHEN us and let it all help us to REMEMBER the words of Jesus, the promises of Jesus and most of all, the power of Jesus — HE HAS OVERCOME THE WORLD!

HE IS THE LIGHT OF THE WORLD…

and HE IS ALL WE NEED.

Overcoming by His Grace,